A Financial Crisis in the Making Part I

In recent months, words such as economic “crisis”, “collapse” and “depression” have been repeated in the media. A financial crisis has built up. The situation is dramatic, and the consequences of the crisis could be significant for very many people – on all continents. [This is the first of two articles on the financial crisis; the next follows in No. 21.]

The fall in house prices in the United States is often cited as the cause of the crisis. Probably a factor as to why they’re doing so poorly. An underlying explanation was a set of new financial instruments (see fact 5) created by financial institutions over the past 25 years. At the heart of this we find so-called “securitization” (see fact 4) (here: increase security, reduce risk). Everything from car and mortgage loans to leasing contracts on aircraft and income from record sales was

Political pressure (from both the Clinton and Bush administration) to provide mortgages to minorities, resale of loans, excessive belief in housing market developments, failing credit ratings and too low interest rates for too long are important elements in the financial crisis (more on that later). But first more about what has happened:

2: A crisis in the making

Banks, financial institutions, equity and pension funds, industrial and insurance companies, certain public actors (for example Norwegian « Terra municipalities ») and not least individuals and others. invested in securities. Many had unrealistic expectations of future income or future own values ​​and financed both consumption and investments with loans. An investment carousel (boom, bubble) was underway.

As is well known, no trees grow in the sky, not even house prices. Interest rates rose, loans became more expensive and borrowers had payment problems. Housing prices in the US thus began to stagnate locally and then fall already in 2006. The scope increased and a crisis came to the surface in the summer of 2007. By then, many people in the US had no longer been able to pay interest and installments on their mortgages. Houses were forcibly sold, and many had to leave their homes.

Gradually, it has all developed into a rolling snowball with increasing debt crisis, lending banks (see facts 1) and investors with major problems, stock markets on a sharp downturn, crisis of confidence, little available credit and thus lack of investment and finally rising unemployment.

In general, it is also important to point out a number of surrounding conditions that together illustrate a United States that was weakly equipped to withstand the crisis that has overwhelmed both Americans and large parts of the rest of the world.

The boom is by no means just the United States. We have seen it as a long period of strong economic growth (see fact2) the financial crisis ” from the bottom up “] and sharply rising real estate and housing prices in a number of countries, among them Norway.

The word “securitization” (fact 4) means an attempt to secure oneself. The lenders (banks) then collected many individual loans, each of which was associated with risk, but to varying degrees. By collecting loans in packages, the risk associated with the individual loans – as was the idea – was to offset each other. And lenders would be left with something less risky. The lenders thus took out loans from different geographical areas, from different social groups, and which had been lent for different purposes, and put them together into marketable securities. 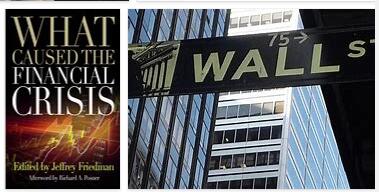