New side of the city center (Naujamiestis) 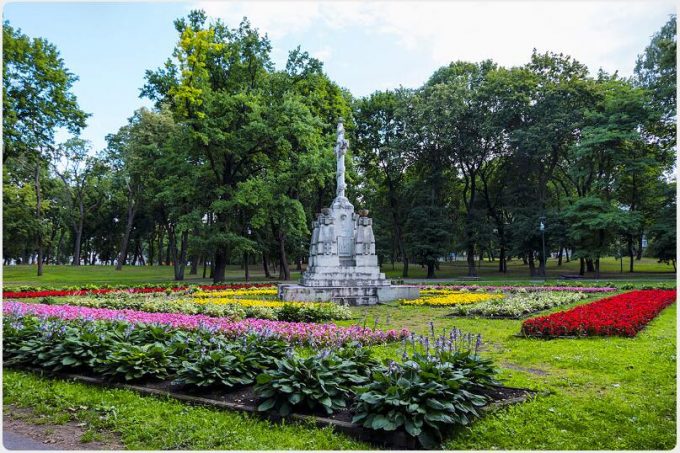 The new side of the city center is a large area, although the most important places are close to the main boulevard that crosses the area. The boulevard was under renovation in 2019–2020, so it is a little different today than it once was.

The new side of downtown is a much more mundane side than the old town, but there is hardly anyone living there either and the area is full of administrative and other public buildings that bring a lot of people from all over the city. The new side of downtown is a better area for an affordable meal than the old town, and there are plenty of shops in the area to get just about anything. There are plenty of accommodations in the new parts of the city center that may be more convenient than accommodations in the old town, as they are a short walk from almost all parts of the city center.

Vilniaus gatvė continues after the underpass on the new side of the city center, and just after the corridor there is a park on the left side, in the middle of which there has been presidential palace. The building housed three different presidents from 1919 to 1939, and today houses a museum where you can learn more about those times.

Vilniaus Street ends soon after the Presidential Palace, after which you can turn onto the main boulevard, called Laisvės alėja. This 1.7-kilometer-long boulevard is especially known for its shops and restaurants, but along and around it there are all sorts of significant, especially architecture and also concert halls. These include the musical theater near the corner of Vilniaus Street , which is in the city park and features a lot of ballet and opera.

If you walk the street forward, you will encounter mainly shops and restaurants, as well as a few administration buildings, but the next actual attraction is about a mile from the musical theater. “Kaunas Cathedral” is one of the finest churches in the city , and the square it dominates has the art gallery “Mykolo Žilinsko dailės galerija”, the most notable detail of which is the so-called “Human sculpture”. This gallery was built as early as the Soviet era and was named after a prominent local art collector. The gallery features works from his collections, including Egyptian ancient art, European art from the 17th to the 20th century, Baltic art from the early 20th century, and changing exhibitions, as well as concerts and other events.

The main boulevard continues after the square, all the way to the large park area (Vytauto parkas), but there is not much to explore for the visitor, but from here at the park at the latest it is worth turning the beak towards the river. If you walk towards the river, you will come across another park area (Ramybes park), which is a good place to visit for those moving here anyway. At its northern end is a brand new one mosque, which is the only stone mosque in Lithuania and which is a bit of a surprising sight here. There is a monument in the middle of the park, and if you want to move towards the bus station, you should head towards the church in the southern part of the park, opposite which is the new bus station , completed in the 2010s . There are a couple of restaurants nearby but not much else, and from there you can get to the train station by walking along Vytauto Avenue, which has several eateries and shops.

If that’s not the case, there’s the city’s best shopping mall, the Acropolis, a five-minute walk from the bus station, and it’s on the riverfront, in a pretty busy location. The riverside shows one of the prides of Kaunas, which is the Žalgiris arena, which was completed for the 2011 Eurobasket Games, and is where the city’s biggest pride since the 1940s, the basketball team Žalgiris, plays.

Other areas in the new part of downtown

Close to the musical theater is a few blocks away with an area with a variety of places to visit. The city’s second music house is the Philharmonic House, which is at the intersection of three busy and important streets. There are several administrative buildings next to it, but surprisingly almost opposite is the Kiemo Galerija, which is always an open courtyard and is known in English as Courtyard gallery. It is an area filled with quite special and unique art with a lot of good filming opportunities. There is no entrance fee, and it is a good, quick place to visit, especially for families and those interested in art.

If you continue straight ahead from the Philharmonic Hall and the courtyard gallery, you will soon encounter one “red elephant” like the one in the courtyard, then a special “devil museum” and then the KMN Art Center with events and special features outside. sculptures. A few hundred meters from this there is still a funicular leading to the Žaliakalnis section , which is worth looking at least a little, but from then on it is no longer worth walking along the same street.

From here, it is worth paying attention to the nearby streets, which are the cross streets of the main boulevard, as they have beautiful architecture from the interwar years . Coming in front of the funicular in particular, A. Mickevičiaus is a street with fine architecture, such as the officers’ club house.

One object of interest to art lovers around this time is the art gallery known in English as the “Kaunas Picture Gallery” , which since 1979 has featured works by both local and foreign artists.

Next to the new city center, in many respects on the hills there is a district called Žaliakalnis , which with almost 40,000 inhabitants is one of the largest in Kaunas. It is not a place where a lot of time should be spent, but those who stay in Kaunas for more than a couple of days can get there by funicular or by walking the gentlest route.

The funicular itself is worth seeing, and it’s worth going downhill in at least one direction. The funicular carriages are still the same as they were in the 1930s, and otherwise everything works the same as it did more than 80 years ago. The funicular began operations in 1931, has run without interruption ever since, and carries a maximum of 36 passengers at a rate of two meters per second and up or down a hillside per minute and 38 seconds at a time.

The area’s biggest attractions are quickly seen, and some of them show up on the new side of downtown. It is not worth climbing the hill except with time, and there have also been a lot of renovations in recent years that have made it a messy place.

The biggest attraction that can be admired from anywhere else in the city is the massive church known in English as “Monumental Christ’s Resurrection Church”. This church, right next to the funicular station, started in a way already in the early stages of the first period of independence in 1922, and its construction began in 1932. However, the war interrupted the construction project, the church was taken over by the occupiers but it was nonetheless almost completed before the war ended. By the time of the Soviet era, only the interior was unfinished and the outer shell had not received its final touches, but soon the church was turned into a course center for radio mechanics and a radio factory. It was not until 1989 that it became a church again, its finishing continued, and in 2004, nearly 70 years after it began to be built, it was finally consecrated.

The church is very simply decorated and externally decorated, but it impresses everyone and its 70 meter high tower can be seen from afar. Today you can go there to admire the scenery, and this is the best place in Kaunas to admire the new parts of the city center from the upper air. You can get there with a lift that costs a couple of euros, and people’s experiences of the church and tower can be read on TripAdvisor.

There is little to walk around the church, and up here in the hills you will find a lot of fine architecture, several university and college buildings, artists’ homes and studios and some of the finest residential buildings in Kaunas, as this is the most prestigious residential area near the center. There is also a stadium, sports hall and other sports venues in the area.

The area is quite large and also includes the Ąžuolynas Park area, which is far from the main sites of the district. However, it is the place where there is the only zoo in Lithuania , called the Lithuanian Zoo. It is a small zoo founded in the 1930s, but it has 3,000 animals and is a popular place to visit, especially for families with children and school groups. It’s noteworthy that the zoo’s greenhouses open year-round at 9:30 a.m. during the week and at 12 p.m. on weekends, and it’s also worth seeing. There is a five-euro entrance ticket to the zoo for adults and 3 euros for 5-16 year olds. It is an old-fashioned zoo from which one should not expect miracles, and the conflicting experiences of people can read on TripAdvisor.