In 2019, Zimbabwe was ranked 158 out of 180 places (CPI value: 24 out of 100) in the international corruption comparison by Transparency International – according to its publication at the end of January 2020. Every year the state loses over a billion dollars through corruption. Transparency International demonstrated structural corruption in the health and education sector as well as in local administration. In 2015, for example, Afrobarometer examined people’s attitudes towards corruption and came to the conclusion that the respondents showed an increase in the spread of corruption but did not report them for fear of state repression. Corruption removes money from the state budget, which, for example, should reduce poverty and improve the situation of the poor. According to extrareference, if companies want to find out more about corruption in Zimbabwe, the GAN portal offers basic information and further information.

An anti-corruption commission set up in 2011 remains largely dysfunctional for political reasons. The misappropriation of state funds increases poverty, social inequalities and the people’s lack of trust in the government. Corruption scandals involving large sums of money have been uncovered time and again since the 1990’s goes. In March 1997, for example, it became known that senior ZANU-PF members had embezzled US $ 450 million from the War Victims Compensation Fund, which was supposed to help victims of the War of Independence. In July 1997, it became public that the Mugabe government had sold Laurent Kabila arms for US $ 38 million and equipment for US $ 200 million in the Democratic Republic of the Congo. In August 1998, a third of the 11,000-strong Zimbabwean troops were transferred to the Democratic Republic of the Congo to fight on the side of Kabila. High-ranking military officials were apparently “rewarded” with mining concessions there. Emmerson Mnangagwa was apparently one of the strategists. According to a report by the UN Security Council, the profits were invested or “laundered” outside the country, ie withdrawn from the tax authorities. Even with large-scale corruption in the context of domestic resource exploitation, the state budget is estimated to have lost over 15 billion US dollars in income, which, among other things, from the diamond mines in Marange – also largely in the hands of high-ranking military personnel in conjunction with Chinese entrepreneurs, among others – to the tax authorities should have been paid.

In the treason trial against Morgan Tsvangirai, a former Israeli spy confessed to receiving US $ 200,000 from the Zimbabwean government to supply classified material and convict Tsvangirai of a plot against Mugabe. Tsvangirai was acquitted in October 2004. In 2004 parliament passed an anti-corruption law and set up a corruption minister and an anti-corruption commission. In October 2004, the International Monetary Fund (IMF) terminated its relationship with Zimbabwe and excluded Zimbabwe after embezzling US $ 295 million in IMF credit.

In mid-October 2016, Vice President Phelekezela Mphoko announced that it would not be a problem for members of the government to use state funds for the purposes of the ruling party ZANU-PF. Specifically, it was about funds for a tertiary education program Zimbabwe Manpower Development Fund for ZANU-PF activities, including for ZANU youth league activities and the President’s wife. A few days earlier, then President Mugabe blocked investigations against the Minister for Education and Higher Education Prof. Jonathan Moyo, which the responsible anti-corruption commission was seeking. It was apparently about factional battles in the ruling party. Individual corrupt ZANU-PF politicians are repeatedly criticized. Personnel changes In the Anti-Corruption Commission and related controversies, for example, at the end of January 2018.

Critical observers do not rule out that investigations by the Anti-Corruption Commission against individual low-ranking politicians at the provincial level are a political strategy. They also view allegations against human rights organizations and international humanitarian organizations with skepticism, especially since those who operate beyond the ZANU-PF strongholds. The extent to which corruption is widespread in NGOs is examined by independent organizations such as Transparency International. Transparency International also deals, for example, with corruption in the distribution of land and discrimination against women small farmers.

The chain of corruption charges tears under the new, since November 24, 2017 incumbent, President Emmerson Mnangagwa not from. These include the corruption allegations of misappropriating money from the state pension fund in the amount of 1 billion US dollars, of money from the controversial “command agriculture ” in the amount of 3 billion US dollars and personally against the tourism minister Prisca Mupfumira in July 2019 and against the health minister Obadiah Moyo during the Corona crisis in June 2020. There are repeated cases of corruption in the award of state contracts, for example in road construction, in the destructive delivery of fuel, the procurement of cars, including for commanders in the army, smuggling of high-priced cars, large amounts of gold, endangered wild animals as well as massive tax evasion of politically well-connected entrepreneurs and corruption in the police up to the highest ranks as well as of members of the army to daylight. 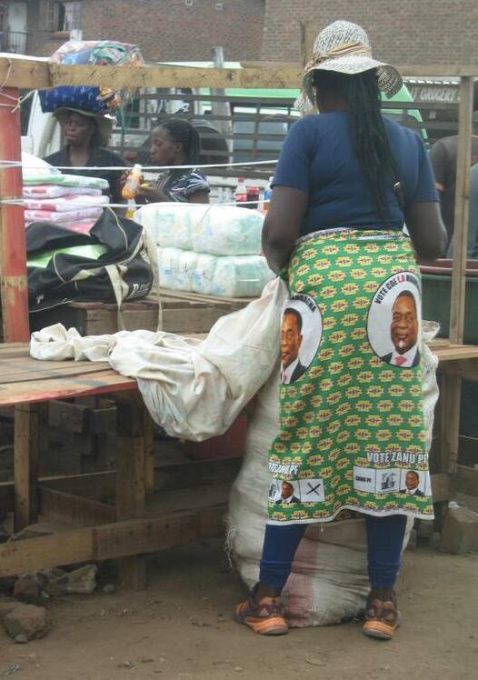