In 2013 the parliamentary and presidential elections took place on July 31, 2013. This date was ultimately set by the Zimbabwean Supreme Court. But it remained controversial because there was little time for voter registration.

The legal basis for the elections was the new constitution. Despite problems with voter registration and the establishment of polling stations, election observers from the African Union (AU) and the Southern African Development Community (SADC) concluded that the elections were free and fair. International election observers did not allow President Mugabe in 2013. Rumors circulated that Israeli experts, in collaboration with Zimbabwean government agencies and on behalf of ZANU-PF, had manipulated electronic voting.

There were also reports of numerous voter threats on election day, obstacles to voting and so-called “ghost votes” being counted; some estimates assume several hundred thousand cases. The MDC-T initially announced that it would challenge the election results in court. Shortly before the scheduled trial, Morgan Tsvangirai withdrew his lawsuit because the electoral commission had not released the documents required for filing. Constitutional Judge Godfrey Chidyusiku described the elections as free and fair.

The elections and the formation of a government were analyzed retrospectively. Internal power issues were discussed in the ZANU-PF. At the end of 2013, there was internal party criticism of the use of party funds by senior members. After the provincial elections in November 2013, factional struggles within the ZANU-PF over the results achieved in the Midlands province and possible election manipulation continued until the end of January 2014. In 2014, 2015 and 2016 there were factional battles in the ruling party for various daily and power-political occasions as well as personal differences formative. They have repeatedly resulted in personnel restructuring and new appointments to ministerial offices. A survey in 2015 gave an opinion on multi-party democracy. In mid-2017 there was already controversy between the ruling party and the opposition over the question of the extent to which the 2018 elections will be free and fair, including voter registration, the implementation of electoral reforms and the right to vote. Political analysts discussed possible violence in the context of the elections scheduled for July 30, 2018. Because already on June 23, 2018, a bomb exploded in a stadium in Bulawayo during an election campaign event of the previous ruling party ZANU-PF; two people died and many were injured.

The turnout was over 70%. With regard to the registration of voters in the individual provinces, after the elections it became known to consider changing the geographic mappings in the west of the country, as far as the constitution allows. The average age of those eligible to vote was 40.2 years, so younger voters in particular were asked to vote. The two largest parties (the ZANU-PF and the MDC-Alliance) used gender parity and statements on women’s rights and gender equality to win votes. However, it was not just gender and age that were decisive for voter turnout, but also place of residence. Because Zimbabwean migrants in South Africa or other countries were not allowed to vote according to the electoral law. Estimates put it at several hundred thousand people. In rural areas, chiefs, among others, influenced voting behavior, which international election observation missions criticized. Among other things, they criticized the distribution of agricultural inputs and food aidby ZANU-PF politicians shortly before the elections. Immediately after the elections, Harare police and military advanced to force MDC supporters apart. Chamisa had declared herself the winner even before the official announcement of the election results. The protesters demonstrated without registering, it said. Six people were shot and several injured. The MDC office was raided by the police. The subsequently appointed Commission (Commission of Inquiry, Motlantle Commission) was supposed to investigate the violence after the election. In their final report she gave specific recommendations. A lawsuit by the MDC Alliance for election fraud was dismissed by the Constitutional Court. Emmerson Mnangagwa was sworn in as President of Zimbabwe on August 26, 2018. 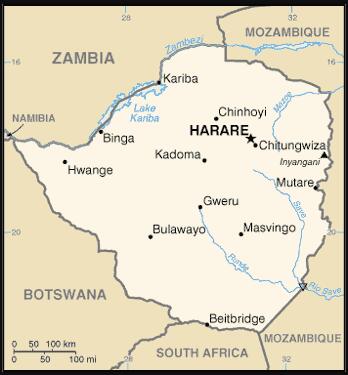