Arbitrary arrests, intimidation, threats and violence were prevalent during and after the power-sharing between ZANU-PF and MDC (after the elections in late July 2013). Systematic violence against human rights activists, against potential opponents of the regime and targeted attacks on homosexuals are components of the politically motivated patterns of violence. The police and the judiciary apply the draconian penal laws. Detainees are often severely mistreated. With a lot of civil courage, human rights organizations try to contain the violence and work on peaceful conflict solutions. In the Zimbabwe Human Rights NGO Forum19 human rights organizations are united. They publish regular reports, such as the 2018 and 2019 annual reports, as well as monthly overviews on organized violence and torture, as in October 2016. They demand the realization of human rights, for example in August 2019 following attacks by state security forces, and an end to impunity. Some also criticize the inadequate observance of economic and social rights, for example due to years of lack of supplies and the unequal distribution of food aid, primarily on the basis of party affiliation and corresponding exclusions of people who were or are considered to be opposition supporters.

According to ethnicityology, the Zimbabwe Peace Project (ZPP) also reports regularly on human rights violations and politically motivated violence. In April 2014 alone there were 181 politically motivated acts of violence, in March 2014 there were 224. In April 2015, more than 200 victims of violence were assumed, the reason for which was by-elections at the local level. In January 2017, for example, the violent incidents were 108, affecting over 600 people each. For example, numbers of victims of politically motivated violence are also available for 2018 and 2019 as well as January, February and July 2020. This violence continues, as human rights organizations – including Amnesty International in August 2019 – and a number of media reports. The ZPP director Jestina Mukoko fell into the clutches of the state security forces in 2008 and was severely tortured while in detention.

The state human rights commission set up in March 2010 is considered to be almost inactive; a human rights law was only passed in October 2012. However, in January 2013 the director of the human rights organization ZimRights was arrested; he was accused of forging voter registration cards, which has been criticized internationally. Zimrights employees had already been arrested in December 2012. Torture of political prisoners and arbitrarily arrested human rights activists was not only the order of the day in early 2013. At least 100 people died in custody between January and November 2013. Overall, the prison conditions are still inhumane and hazardous to health. The documentation violent attacks by security forces or party-affiliated thugs are carried out by international human rights organizations such as Human Rights Watch or Amnesty International. Their demands and reports, which also document violent attacks in the diamond mines and restrictions on the freedom of the press, refer to the international human rights standards and human rights treaties of the African Union (AU) signed by Zimbabwe. The government is therefore subject to regular reporting obligations; independent human rights organizations comment on official reports or document serious human rights violations, e.g. in 2018 and 2019 with opinions on Zimbabwe.

Zimbabwe was repeatedly in focus as part of the Universal Periodic Review process of the UN High Commissioner for Human Rights. The latest report by the Zimbabwean government and the criticism of the Zimbabwean human rights organizations were discussed in early November 2016. In Zimbabwe, among others, the organization Zimbabwe Lawyers for Human Rights campaigns for the observance of human rights and for human rights defenders, for which lawyers like Beatrice Mtetwa themselves are attacked or arrested.

In June 2015, President Mugabe caused controversy, especially as he would urge the member states of the AU to withdraw from their obligations to the International Criminal Court (ICC) in The Hague. President Mugabe was chairman of both the AU and the Southern African Development Community (SADC) in 2015; both are rotating, yet influential offices. Human rights organizations from various African countries protested against ICC exit efforts by the governments of Zimbabwe, South Africa and Namibia. Zimbabwe signed the Rome Statute on July 17, 1998, but not ratified it afterwards. Individual human rights activists from Zimbabwe also criticize the primacy of economic interests over the lack of criticism by international actors of serious human rights violations and violent crimes by state security forces.

In June 2020, several representatives of civil society organizations were arrested on charges of insulting the president and acting critical of the government. Even lawyers, represented the arrested opposition figures were affected by detention. Arbitrary arrests of citizens took place in July 2020. In August 2020, diplomats from Western European countries expressed their deep concern about human rights violations in Zimbabwe. 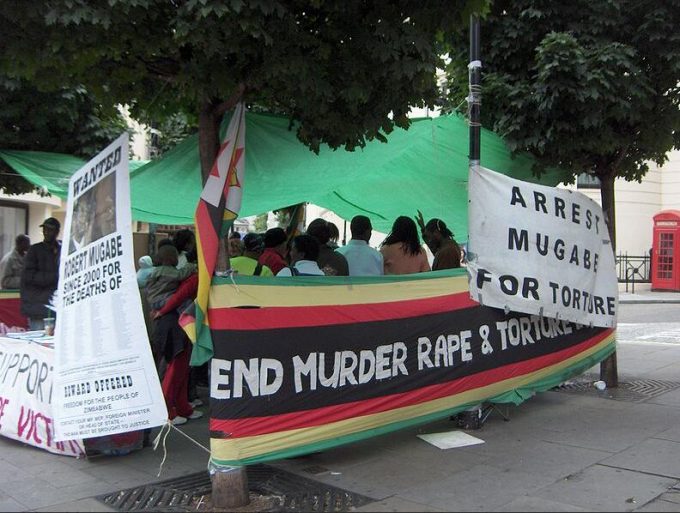