In 1987 the reserved seats for whites in the Zimbabwean parliament were abolished. In the same year ZANU and ZAPU united to form the ZANU-Patriotic Front (ZANU-PF), which they formally accomplished in 1989. Through a constitutional reform, Mugabe President on December 31, 1987, until he resigned in November 2017 after massive internal party pressure. He and his government are accused of abuse of power and corruption. In 1997 it became known that the Fund for Victims of the War of Independence had been embezzled. The war veterans demanded compensation. When the Mugabe government planned tax increases to cover costs, there were mass protests. From 1998-2002 the Zimbabwean military took part in the war in the Democratic Republic of the Congo on the side of the Congolese army. The military and economic interests of high Zimbabwean military officials associated with the intervention were controversial. The UN Security Council Report S / 2002/1146 pointed out their implications into the illegal looting of Congolese minerals and other resources.

On September 11th, 1999, the opposition party Movement for Democratic Change (MDC) was founded under union leader Morgan Tsvangirai. He recalled this in an interview in September 2016, in which he summarized the party’s successes and problems.

After internal conflicts in 2005, the MDC split into the dominant MDC-T, the Tsvangirai wing, and the small faction MDC-M under Arthur Mutambara. In January 2011 Welshman Ncube took over the party leadership; In 2014 discussions took place about a new cooperation. By-elections or new elections in 21 electoral districts on June 10, 2015 were largely boycotted by the opposition parties because they did not expect the elections to be held fairly and hoped for pressure in the context of continental diplomacy. The turnout was correspondingly low and politically motivated violence, especially by supporters of the government camp, was used before the elections.

The regime critic Tsvangirai survived at least three attacks in the late 1990’s. In 1999 he played a key role in founding the MDC. On March 11, 2007, he was severely mistreated by the security forces and suffered a fractured skull. In 2000 and 2003 he was the victim of physical assaults and arrests. In 2008 he was arrested again. Under Tsvangirai, the MDC grew stronger as the main opposition force. After several controversial elections and long negotiations, Tsvangirai and Mugabe agreed on a power-sharing in September 2008. Tsvangirai was sworn in as Prime Minister on February 11, 2009. After the elections at the end of July 2013, he had to abdicate and moved back to the opposition bench. In September and early October 2017, the media reported on his serious cancer and pointed out the consequences for his political tasks and plans. In mid-November 2017, Tsvangirai spoke up in the context of the political escalation, the intervention of the military and the processes initiated by the military and supported by large parts of the ruling ZANU-PF party for the removal of President Robert Mugabe. Morgan Tsvangirai passed away on February 14, 2018. International media reminded of his political life.

According to constructmaterials, controversial presidential elections in 2002 and the elections for the House of Representatives and Senate in 2005, which were accompanied by disagreements, sparked political protests. Changes to the electoral law made it possible to hold parliamentary and presidential elections simultaneously in March 2008, the results of which were once again questionable. Intimidation, arbitrary arrests and violence escalated during the election campaign. The opposition’s allegations of incorrect counts in the presidential election could not be dispelled. Just before the Zimbabwe Electoral Commission (ZEC) announced the official results, police stormed the office of the Zimbabwe Election Support Network (ZESN) and confiscated documents. The ZESN was founded in 2000 as a coalition of 31 non-governmental organizations, it advocates free and fair elections. A runoff election had to take place for the presidency in 2008, from which Mugabe – the only candidate – emerged victorious. In areas where people voted for the opposition, thugs loyal to the regime inflicted excessive violence. Over 30,000 people were displaced, 100 killed, 3,000 tortured or seriously injured.

The date for the parliamentary and presidential elections became a bone of contention between the MDC and ZANU-PF. He was repeatedly postponed on intervention by SADC. There were also arguments over the role of the security forces, particularly the unreformed police and the military. It was also controversial whether the ZANU-PF would allow international election observers or whether the elections should only be observed by Africans. 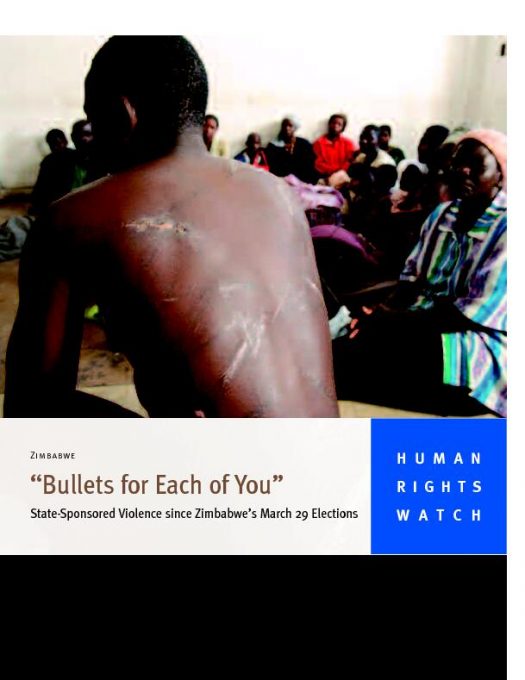