2015 could be a special year in Polish – and possibly European – history books. For the first time in its recent history, Poland got a majority government with one governing party. It can hope to carry out its plans without having to seek support from other parties. In addition, this government can work closely with the new president who comes from the same political environment.

After three rounds of elections in 2015, the new government was finally able to establish itself. It has already changed the political landscape in the country a lot, and may also change Poland’s relations with its allies in NATO and partners in the EU.

2: Briefly about Polish history and geopolitics

Poland is a central European country, in the double sense of the word. The country is located in Central Europe, sandwiched between the former Soviet Union and Germany. As one of the six largest member states of the EU and an important NATO ally in a historically vulnerable area, Poland plays a key role in European politics. Geographically, Poland is the size of Norway, but with its more than 38 million inhabitants, the country is more than seven times larger than Norway.

What separates Poland and Norway is, among other things, different locations and history. While Norway is on the outskirts of Europe, Poland is in the heart of Europe. Norway’s history is partly similar to Poland’s – both countries long disappeared as independent nations from Europe’s political map. But while Norway was on the fringes of the Danish and Swedish kingdoms, Poland was a European power that after a period of great power disappeared from the political map at the end of the 18th century. The country was then divided between Russia, Prussia and Austria.

Poland re-emerged as an independent state in 1918, but the joy was short-lived. As early as 1939, Poland was again divided by neighboring countries. The western part was occupied by Nazi Germany; the eastern part was incorporated into the Soviet Union. Poland was again put on the political map of Europe in 1945, after losing almost 6 million of its inhabitants – of which 3 million Polish Jews in the Nazi concentration camps.

In addition, the country lost large areas to the Soviet Union in the east and was “forcibly relocated” to the west. Large parts of Germany were then transferred to Poland as compensation for lost land in the east. Beyond this, the new Poland was forced to become part of the Eastern Bloc – ruled and controlled by the Soviet Union. It was only after several uprisings and the end of the Cold War that the country became independent again. This happened as a result of a political compromise reached in 1989 between parts of the anti-communist opposition (Solidarity) led by Lech Walesa and communist rulers who realized that the country needed economic and political reforms.

With its recently regained independence, the country’s new political power elite chose a clear provost course. In 1999, Poland joined NATO, and in 2004 it joined the EU.

In 2014 , according to NEOVIDEOGAMES, Poland marked its first 25 years as an independent state after decades of Soviet rule, its 15th anniversary as a member of NATO and its 10th anniversary as a member of the EU. The country was perceived by most observers as a success story and these years were often described as the country’s golden era. The borders were safe, the economy had grown steadily since 1992; most benefited from the increased prosperity and the country was firmly rooted in the western alliance and in the EU.

After ten years of EU membership, the infrastructure had been greatly upgraded, among other things. a. thanks to large remittances from the EU. More than 2 million Poles worked in other EU countries; their families in Poland also benefited. Unemployment was declining, and many studies confirmed that most Poles seemed satisfied with the development.

In 2014, the country had a coalition government formed by two parties – the Liberal Citizens ‘Platform (PO) and the Peasants’ Party (PSL) – which won the elections in both 2007 and 2011. Then – for the first time in Poland’s recent history – in 2011 a sitting prime minister, Donald Tusk, renewed his mandate in elections. In addition, this government had the support of President Bronislaw Komorowski who came from the same political milieu; in 2010 he won the presidential election against Jaroslaw Kaczynski. Kaczynski led the main opposition party, the strong value conservative Legislative and rettferdighetspartie t (PIS) that had government authority between September 2005 and November 2007.

Already in 2014, there were several reefs in the sea. In the east, Russia chose to use military force (cf. Ukraine) to strengthen its position vis-à-vis Western rivals. Since then, Russia’s annexation of the Crimean peninsula (Ukrainian) sent shock waves through Europe and helped increase security tensions on the continent. Europe’s – and thus Poland’s borders thus became much less secure. 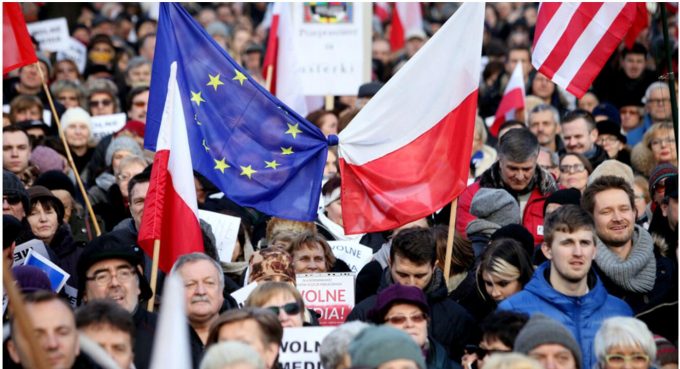