The people in Zimbabwe attach great importance to a good education for their children and their own further training – also in comparison with other countries. During the colonial era, children of the black majority were denied a good education. Only a few – mostly the sons of a small elite – were able to attend mission schools or craft courses. The Mugabe government changed that fundamentally after 1980. A good education was one of the promises of the struggle for independence. The structural improvement of the entire education system with state schools throughout the country was achieved with a high education budget and international funding. The legal basis for the primary and secondary school system was the Education Act of 1987which was supplemented in 1991 and 2004. The current education policy planning basis is the education sector strategic plan 2016-2020. The UNESCO Accountability Report 2017 also offers a lot of detailed information about the education sector.

Numerous teachers from the German Development Service (DED) also contributed to the establishment and improvement of secondary and vocational schools, particularly in the 1980’s. Individual school partnerships between Zimbabwean and German schools, for example in Bielefeld, still exist today thanks to the commitment of the teachers.

In 1979 there were 177 secondary schools, in 1989 there were 1502. The curriculum was fundamentally reformed and teachers were trained more professionally. Parents sent their daughters to school in large numbers, state and private schools had a high level of education. Mothers and fathers attended adult literacy courses. These investments have paid off: 93% of all women and 96% of all men are now literate.

As a result of the economic structural adjustment programs (ESAP) and the savings in the state budget demanded by the International Monetary Fund from the beginning of the 1990’s, the government had to reduce spending on education. The problems escalated as a result of the economic crisis and the political conflicts that began in 2000. Numerous teachers left the country and many died of AIDS. While in 1995 72% of the pupils successfully passed the final examination of the secondary schools, in 2007 it was only 11%. And that although parents had to pay school fees in state schools. The career prospects of the graduates were poor. Many found themselves forced to take casual jobs in South Africa to support their families. girlcame under pressure to enter into sexual relationships in order to raise debt. Quite a few had to drop out of school. Many had to buy access to exams with sexual services, which infected countless female students with HIV. The UN Children’s Fund UNICEF and the UN education organization UNESCO promoted HIV awareness campaigns for schoolchildren and teachers, but their implementation was often prevented by gender hierarchies in society.

In the political crisis year 2008, the situation worsened again, over 90 percent of rural schools remained closed. Only 20 percent of the children went to school. Many teachers received no or only minimal salaries. Parents could no longer pay school fees. The teachers’ association criticized the politically motivated violence against teachers. For years, schools in Matabeleland have been disadvantaged in terms of access to staff and funds, so that a large number of students there have already dropped out or failed their exams. The direct interference of the Zimbabwean military in educational institutions – not only in the Matabeleland provinces – increases structural problems and burdens, especially for teachers who are accused of being critical of the regime.

According to pharmacylib, at the beginning of 2014, it was announced that the Zimbabwean government would save money on the previously controversial education budget. From the budget made available, only about 82,000 secondary school students could be taught. However, free educational offers for 750,000 children in primary schools and grants for 250,000 children in secondary schools were planned. UNESCO provides overviews of annual spending on education. 2015, the Government increased school fees, leading exam fees for O’Level and a Grade 7, protesting against what parents and students / -Innen.

For years, the education sector has received extensive support from international organizations and civil society and private initiatives. Although international donors have made extensive funds available, the inadequate support of children whose parents or grandparents were unable to raise the required school fees themselves because of poverty problems is a problem, which indicates a lack of transparency within the Zimbabwean bureaucracy. Many children therefore have to drop out of school. The problem situation for girls is particularly serious who leave school for economic hardship and are forcibly married because their impoverished parents then receive a bride price – albeit a small one. Or they have to prostitute themselves to help finance their families’ basic needs. The Zimbabwe National Council for the Welfare of Children (ZNCWC) criticized in March 2017 that girls often received little food or everyday necessities for their sexual services; they would have no bargaining power over suitors and countless would become infected with HIV.

The realignment of the school curriculum, which came into force at the beginning of 2017, sparked a lot of discussion and criticism. The content, which focuses on computer literacy and the celebration of national identity, was found positive in some cases, but mostly criticized for various reasons, especially since many schools have neither electricity nor internet access, school books are in short supply and there are no teaching materials for the new courses. Many teachers saw themselves fundamentally overwhelmed, civil society groups resisted the loss of educational content and the training of mass performances by the children. The announcement by the Ministry of Education in April 2017 that a law would soon be passed to settle the school fee waived, according to which livestock would also be accepted for these payments. This should give poor children access to school. The long way to school remains problematic for numerous schoolchildren, only in some places there is a rental of bicycles, there the girls and boys no longer have to walk for hours to school or home. Disabled girls face particular problems with access to education. In 2019 and early 2020, planned or announced increases in school fees were the cause of controversy.

Vocational and technical schools are based on the legal basis of 1984, which was amended in 1996. The craft training is practice-oriented, various technical training centers (some private institutions) offer appropriate courses and courses. The German Academic Exchange Service provides information about higher education. There are universities in Harare and Bulawayo, and higher educational institutions have also emerged in smaller cities in recent years. However, studying is difficult for the majority of young people who are not part of the political elite. There were also irregularities in the award of scholarships. The extent to which the research is independent of the regime has been the subject of controversial discussion, especially for the period since 2000. The tertiary education sector has suffered losses in recent years as a result of the political and economic crisis. Numerous university graduates are confronted with massive problems as young professionals and, accordingly, with youth unemployment. 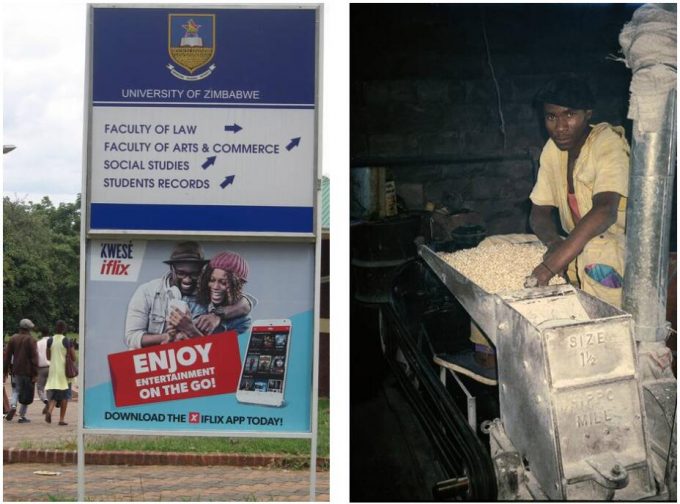