Zimbabwe is a republic with a presidential constitution. Head of state and government is Emmerson Mnangagwa. The seat of government and parliament is Harare. There is a bicameral parliament: the House of Assembly(Lower House) consists of 210 MPs, each representing one constituency. 60 candidates are directly elected to the Senate (upper house), specifically six per province. There are also 10 provincial governors and five persons personally appointed by the president. There are also 18 chiefs represented here, 16 of whom are elected. The President of the Council of Chiefs and its Vice-President also sit in the Senate. The office of chief goes back to pre-colonial forms of rule, which were transformed in the colonial times according to the administrative requirements of the time. After political independence, chiefs were integrated into the new power apparatus. According to the constitution, their office is not tied to a party, but in fact they stand as a power group between the partiesand between different factions of the ruling ZANU-PF party.

According to computerannals, the cabinet is appointed by the president; In recent years, the number of ministers and their deputies has increased again and again, most recently in October 2017; then there were also transfers and new appointments of ministerial posts. Emmerson Mnangagwa, sworn in as the new President of Zimbabwe on November 24, 2017, made further changes in the cabinet. According to media reports, Mnangagwa dismissed Mugabe government ministers three days after his inauguration following a military intervention that led to the resignation of President Robert Mugabe on November 21, 2017. Mnangagwa began assembling a new ranks of ministers. Parliamentary and presidential elections are usually held every five years, most recently at the end of July 2018. All citizens over the age of 18 are eligible to vote.

Constitution and separation of powers

Under the unity government, a Constitutional Select Committee was appointed in February 2009 to develop a new draft. It was presented in July 2012 and was a compromise between ZANU-PF and MDC-T. Shortly after its presentation at a SADC summit (country association in southern Africa) in August 2012, some ZANU-PF representatives criticized the draft. During this summit, civil society critics from Zimbabwe called on SADC representatives to address the overwhelming power of the military in Zimbabwe. In Zimbabwe, human rights organizations tried to enter into dialogue with political decision-makers and to inform the population about the content of the draft constitution. The documentary Democrats reports on the debates in the context of drafting a new constitution. This internationally award-winning film was banned in Zimbabwe between 2016 and February 2018 despite an official shooting permit.

In mid-January 2013, ZANU-PF and MDC-T agreed on a revised draft constitution, and the population decided on it in a referendum on February 16, 2013. The majority accepted the new constitution, which was approved by parliament in mid-May 2013. The debate about problems and potentials as well as the adaptation of the existing laws continues. Again and again, there are efforts, the Constitution for the purposes of the ruling party ZANU-PF and the expansion of power of the President to change. In addition, the politically induced economic crisis and corruption are affecting the implementation of constitutional rights, including the right to health and safe drinking water. 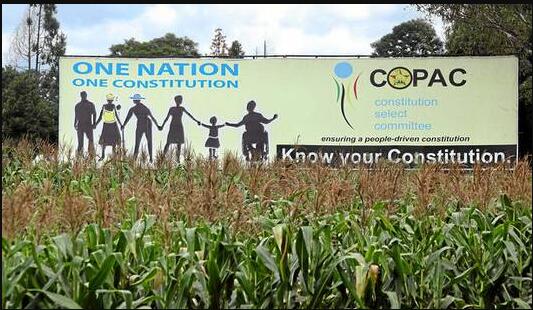 The political administration in Zimbabwe is divided into eight provinces and two cities that have provincial status: Harare and Bulawayo. Provinces and their administrative centers are: Manicaland (Mutare), Mashonaland East (Marondera), Mashonaland West (Chinoyi), Mashonaland Central (Bindura), Matabeleland North (Bulawayo), Matabeleland South (Gwanda), Masvingo (Masvingo City) and Midlands (Gweru). Within the provinces there are 28 urban councils and 55 rural districts and 1200 parishes (so-called wards), each of which includes several settlements (villages). At the same time – based on pre-colonial forms of rule – there are over 250 (chief) doms with subordinate headmen and village heads.